The UK Antarctic Heritage Trust staffs the most southern post office in the world located at Port Lockroy on the Antarctic Peninsula. This remote outpost attracts a resilient crew over the summer months. It is also a popular stop for tour ships as it houses a museum of early explorers to the area.

We sailed into Port Lockroy aboard the Icebird, a 60ft sailing boat. As well as popping in to see the Port Lockroy team and the local penguins we were also set on climbing Jabet Peak. At 545m Jabet Peak is a decent looking spire in the centre of Wiencke Island on which Port Lockroy is located. We disembarked the yacht with climbing gear in tow.  We took a zodiac across the bay to the shoreline to begin our trek to the summit. Having ascended a few mountains in the region already, this was our final ascent before heading back across the brutal Drake passage to Argentina. To now, all had gone to plan we were familiar with the rigging routine and got harnessed up for the climb.

The first part of the climb crossed a large glacial valley full of crevasses. There is simply no avoiding them in Antarctica. We were roped to each other for safety and despite wearing snowshoes we still often sunk to our waists in the soft snow. The extra deep steps I hoped for the familiar feel of resistance rather than the snow giving way to a vast glacial void.

It was quite warm climbing the glacier. With clear skies the sun was shining brightly, reflecting off the snow.  A slow steady climb ended at a rocky outcrop where the more technical climbing began. We affixed crampons to replace the snowshoes to give grip in the icy patches destined to follow. With exposed rocks in between, crampons become a clumsy utensil to have attached to my feet. Navigating a few ice chutes we arrived on a narrow ridge line which ran pretty much to the summit. Either side of the ridge line there was a sheer drop of some 500m! We were still roped to each other on this section thankfully. The ridge line had a number of steps to overcome. Each about 10m high. With two ice axes as anchors for the hands and the crampons for my feet it was a robotic set of vertical marching movements required to get up and over the lip of each step. Over what felt like the 5th successive step the ridge line ended, meaning we were at the summit! Quite a view down to the the Port Lockroy base and our yacht which was moored close by. Given the razor like ridge I straddled the ridge to have balance while I sat and admired the view. The sheer cliffs of exposed rock somewhat rare in a place that is perpetually covered by snow and ice.

Descending Jabet Peak was unique. Once we arrived back on the glacier, in a part we were assured was clear of crevasses, we clutched our packs to our chests, took a run up and slid on our behinds down the icy face. A good few hundred metres of continuous sliding was possible before it evened out and it was back to the snowshoes.

A detour was taken on the way back via Dorian Bay for a visit to Damoy Hut. Damoy hut was built in 1975 as a transit station for scientists. As passage is often blocked further south due to pack ice, Damoy Hut is situated at the end of a long wide expanse of ice used as a runway for aircraft. These aircraft ship scientists further south when the ice is too thick for the ships. Damoy Hut accommodates the scientists during transit from ship to aircraft. The realisation set in that we had just slid down a runway! As the weather was closing in we radioed for the zodiac to swing around to pick us up from Damoy Hut. Circling back via the water the summit of Jabet Peak came in and out of view between the passing clouds. It was a fitting final peak as part of a wondrous Antarctic adventure. To be able to freely scamper over the extreme terrain and come across pockets of history from the early explorers of this unique continent is truly a privilege. Now only the Drake Passage to revisit to get back to civilisation!

We were pleased to see this article printed in Outer Edge Mag (Edition 52). 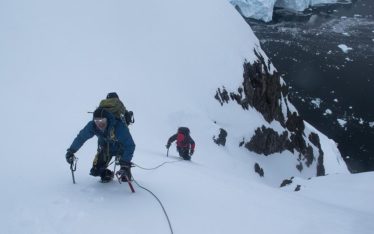