A Day Hike from Puerto Williams Many New Years Day’s are started with a late greasy breakfast, potentially on the sofa watching re-runs of How I Met Your Mother, or instead, taking a dip in the ocean to clear the cobwebs from whatever exuberant celebrations occurred the previous evening. So it was a bit of a change this year after only 2 hours sleep that I was lacing up my hiking boots and setting off on a 6-hour hike of Cerro Bandera from the most southern city in the world, Puerto Williams.

Puerto Williams is located on Isla Navarino one of the many large fractured islands spread across the bottom of South America’s Patagonia region. Puerto Williams is home to a Chilean Navy base and a small settlement of locals, some hailing from the native Yaghan people famous for having survived the bitter cold of this inhospitable landscape wearing little to no clothing for the past 10,000 years.

Getting to Puerto Williams is in a word a challenge. Unless you are sailing to or from Antarctica (as we were) or flying in from Ushuaia on their twice weekly commercial service, you are unlikely to find many other ways to arrive into Puerto Williams as a tourist. The main tourist drawcard to Isla Navarino, apart from the marina, is the 5-day (35km) Dientes de Navarino circuit hike. We had a pending 4-day sail to Antarctica across the Drake Passage the following day so our exposure to the circuit was limited to one peak, Cerro Bandera a 5 hour return hike up to 620m.

Our hike began from the before mentioned marina, dominated by an abandoned, half sunken cargo ship the Micalvi. The Micalvi now serves as a hitching post for yachts like ours headed to and from Antarctica. The infamous low-roofed saloon is often filled in the sailing season with many scruffy looking sailors celebrating either their return from, or departure to, Antarctica. We set off walking along the shore of Isla Navarino, our group of 6 was soon joined by one more eager participant, a black Labrador named Oskar. Apparently a resident of Puerto Williams, he has no doubt has accompanied many a trekking group up Cerro Bandera and was quite happy to tag along, even lead the way at many points taking over from our guide Phil. Starting the hike to Cerro Bandera, Oskar in tow, taking a water break.

With a keen photographer in the group we were all in search of a unique woodpecker, the Magellanic woodpecker to be precise, a resident to the southern Andes and one of the largest woodpeckers in existence. We could see evidence of it’s industrious work with many holes punctured in the sides of trees leading up the trail through a thick forest. This evidence though was all we spied of this elusive woodpecker the entire route.

We stopped midway up the mountain for a quick snack just before the tree line ended. Oskar even got a little water to drink siphoned out of our trekking water bladders. Then we started a windy zig-zag path above the tree line through some waist high bushes just as light snow began to fall. For the first time the legs were starting to burn as we reached the steepest part of the hike just below peak.

A single weathered flagpole, sans flag, marked the chilly wind-blown summit with a delightful view back up the Beagle Channel.  We had just sailed this the previous day, the final day of 2013. To enjoy a hike on the following day, the first day of 2014 not only cured a New Years Eve hangover but got me in ship shape condition to face a more tumultuous Drake Passage crossing in the days ahead. Summit of Cerro Bandera including Oskar who, with 4 legs, had a distinct advantage! 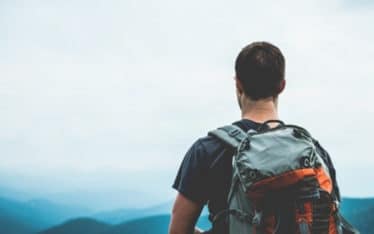 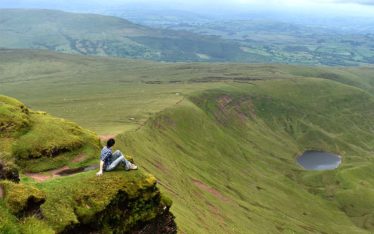 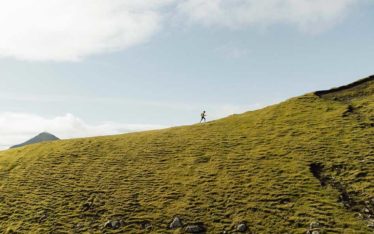