The overnight train from Varanasi continues till 7am. Our elderly guest packs away his belongings into his briefcase and is ready for his day of business in Delhi.

We on the other hand get a taxi across Delhi to the airport. We pass a number of Commonwealth Games constructions including a large canvas billboard promoting the games. Square sections of this had been cut out. Presumably used as tarpaulins for some shanty dwelling. The Commonwealth Games is giving back to the people of Dehli before they know it!

Long wait for the plane to Bangalore. Not that we are stopping there. It is a mere stop over  before continuing to Kochin. One thing you don’t realise is that India is big! It is 3 hours to Bangalore and another 4 to Kochin right down near the bottom of India in the state known as Kerala. Kerala being quite different to the north. Both due to the religion, the south is mostly catholic, and cuisine involves more seafood and a distinct way of cooking.

We are greeted again by a friendly face holding a sign with our names on it. This time taking us to one of Dave’s picks, the Old Harbour  Hotel. The drive taking us through a thunderstorm which is another distinction of this area as it is very tropical, see humid! The Old Harbour Hotel is a renovated old 19th Century mansion so should be called the New Old Harbour Hotel. Regardless it is pretty spectacular. Old world charm with modern fixings. The staff are what make it though with nothing too much trouble and everything dealt with swiftly and friendly. This just adds to the charm.

With a good 36 hours of travel behind us we settle in for dinner. Curry anyone? It is surprising that you we don’t get sick of curry the entire time we are in India. It is different of course to the meals you would receive in Australia. A lot simpler dishes, more vegetarian and pretty damn tasty!

A wine list has us ordering a Rose given the humidity and the fact we were out voted by the girls. To this day I swear Dave tasted the wine and gave the waiter the all clear. When the wine was put to our lips however the taste was quite possibly the worst wine I’d tasted. I’m no wine snob but this was pretty undrinkable. Like vinegar mixed with Ribena. It was however after we each finished half a glass that we commented on it to each other.

Debate reined around what we should say. We agreed we were not in India for the wine so we left it and even worse to save face we finished off our glasses!

The main attraction in Kerala, the reason we are here is the 900km or so of ‘backwaters’. Lakes, canals and rice paddies that are inland off the coast and act as a bit of a food bowl to the southern region of India. Many small villages are dotted throughout some completely below the water line with pumps and levies keeping back the water.

The attraction for tourists is the old rice barges which have been done up into house boats and serve to ferry passengers around the backwaters to give them a taste of the Indian or Keralan way of life.

We are taken to our houseboat which is quite modern inside despite the rustic exterior. It has 2 bedrooms with ensuite, a number of chairs and lounges up front and a crew of three plus meals all for $40 pp per night! The houseboat is covered in a lattice of bamboo and rope which has been maintained for aesthetics but is quite waterproof also.

Lunch is served and given this was whipped up in the tiny kitchen off the back of the boat, the food is absolutely devine. We sit back as the engine starts and we cruise at a snail’s pace out of the small port and into the wide lake. The pace seems to fit the mood with nothing being too urgent.

We encounter a few other houseboats in the first lake possibly following the same route. Rather than making it seem busy the rice barge themed boats add to the atmosphere with many a photo opportunity had.

We pull into the bank and tie up for the night and watch the sunset over the rice paddies. Another great meal is served for dinner and with a few cold beers makes for a very enjoyable evening talking into the night. Still we are in bed most nights by 9pm, the party animals that we are.

More of the same from Day 1 on the rice barge come houseboat.. Read books, eat, chat, nap. We stop into a few villages deeper into the backwaters. Most houseboat trips are overnight but we have chosen 2 nights. Allowing us to go further in to less populated or at least less visited villages and less and less houseboats to dodge.

We stop for lunch at our turn around point. The day previous we had picked up some gigantic tiger prawns from a floating stall for cooking up for dinner. These were great tasting and compliments to the chef again in preparing such a delicious meal from his poky kitchen in the aft of the boat.

Our driver actually pops into his own home for a short while and we get to meet his wife and 2 year old son. His Mother in-law also greets us. His house is a simple cinder block construction of one room with some space cleared amongst the surrounding rice paddy to tend to some chickens. The house alarmingly is behind a levy and sits at it’s base at least 2m below the water line. The water lapping at the top of the levy, in what would be devastating should it ever spill over and it’s impossible to see how it ever wouldn’t. It rains here, a lot, and is close to the ocean so floods and king tides are bound to be a daily concern. School children we have already seen walking to school in ankle deep water.

Our day turns to night. Our 3 boat hands making sure we have everything we need. And, we spend our second night in the peace and quiet of the Kerala Backwater somewhere near the southern point of the Indian sub-continent. 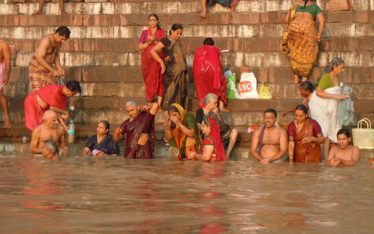 Varanasi
Awake to the clickity clack of the overnight train from Agra into Varanasi. Slept pretty well and with no reason to get up, slept through to 10 am. We arrive...
92 Likes A Night at the Taj Mahal
We had passed the 3rd level of security. The small group of tourists was down to 12. We felt like Charlie visiting Willy Wonka's chocolate factory clasping our golden tickets....
92 Likes 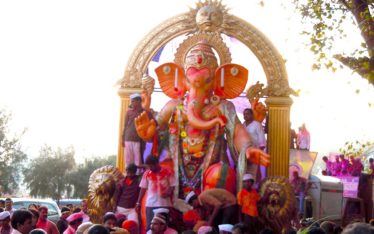 Ganesh festival, Mumbai
We awake early on the first day of our India travels and take a stroll out to the Gateway of India. Being early we awaken some of the locals who...
91 Likes
wpDiscuz
0
0
Would love your thoughts, please comment.x
()
x
| Reply