I’d never missed a flight before. This was not a record I was tracking closely or even particularly proud of. I supposed it was something of an achievement. Not a pin-a-medal-on-my-chest type of achievement but one of those silent, inconsequential accomplishments one has the liberty to offer themselves if they so wish.

This thought dawned on me as Erin and I sat in the sweltering, congested traffic of Yangon en route to the airport. “Thingyan,” muttered our cab driver. He didn’t look happy. After all, this “Thingyan” was the proverbial elephant in the room (or in this case, our car) as to why we had not progressed very far in the past half an hour. As the chances of making our flight got slimmer by the minute, I began to grow more and more nervous.

We knew all too well that ‘Thingyan’ celebrated the Burmese New Year. Held over 4 days each April, what began centuries ago as a religious sprinkling of water to cleanse one’s sins for the year ahead is now one massive, nationwide water fight! Unless you wear the saffron coloured robes of a Buddhist monk or are clearly with child you will be enthusiastically drenched by just about everyone you pass. We’d spent a few days in Dawei in the south and also in the capital Yangon. At first we revelled in the water fights but this is a four-day water fight you cannot just tap out on. Each time we left our hotel we returned dripping wet.

Recent revelations had uncovered that during the water festival the country also grinds to a halt. Borders and government offices close, many trains and flights stop running or are exceedingly full. So too is most of the accommodation. I also doubted the local airline Air KBZ has a simple refund or exchange policy on our tickets. Our flight from Yangon was a critical link to the north of Myanmar avoiding days aboard an over-crowded train where a few spare carriage floorboards were our best bet for accommodation. We had to make our flight.

Our taxi was surrounded by a carpark of pickup trucks full of dancing, possessed youths spraying water over each other and fellow motorists. Like armed gangs roaming the streets in an apocalyptic movie, they had replaced would be machine guns with water pistols. Everyone was headed to ‘Thingyan HQ’ in order to be formally doused by gigantic water cannons. Our driver obviously saw this as an event we’d like to see again on our way to catch a plane.

While I was getting stressed about missing a flight, the Thingyan festival is ironically viewed as the nation’s stress release valve. Where people let their hair down and free themselves from the many real day-to-day concerns faced by Myanmar citizens. The growing intensity in the crowd matched the growing anxiety overcoming me.

“How about we walk?” I suggested to Erin half-heartedly, knowing it was out of frustration more than anything.

“We’ll be drenched! So will all our stuff!” she replied. Just then a hose swept past our window.

“Maybe we could ask them not to wet us?” I naively suggested as I watched a policeman trying to assist with traffic being systematically hosed by a teenager on a truck.

“We could try to get through via some back streets to avoid getting completely soaked and get a taxi somewhere on the other side?” A last ditch attempt to free myself from the taxi.

So it was agreed. We left our confused taxi driver some Kyats for his trouble, tried to protect key items like phones and passports in a plastic bag, and then seized our packs from the trunk before stepping out into what was like a crowd of water-crazed zombies. Our dry appearance was akin to exposing fresh meat to be devoured.

Immediately, two dear old ladies casually poured the first of many chilled jugs of icy water down our backs. Our pleas for clemency fell on water clogged ears as we stepped through clusters of people who were all too willing to cover any dry patches with a cleansing jar of water. Standing still simply attracted more water zombies so we had to keep moving frantically through the crowds.

We attempted to navigate around the water cannon stations jetting in from each side of the road. To our dismay, Police had blocked any alternate routes. We were stuck. Now forced to wade through what was the epicentre of Yangon’s, if not Myanmar’s, water festival celebrations. We began our route through crowds of soaked revellers, cars armed with ice-filled buckets and 10 powerful water cannons jetting in from each side. Just getting through would be a challenge, getting through dry was very unlikely.

We picked a route through the middle where the water cannons did not often reach. Then we ducked and weaved like prison escapees from scouring searchlights trying to avoid the jets of water aimed into the crowd. We took a few direct hits to our already soaked bodies but our bags remained only lightly sullied from splash back. However, somewhere along the way we got completely covered in shaving foam!

We emerged out the other side, soaked but not beaten. A man standing with an open car door was all the invitation we needed to jump in, firstly as refuge, and then asked for a ride to the airport. Whether he was a taxi driver or not was unclear but he was thankfully willing to assist a pair of sodden tourists. Our flight was due to depart in 10 minutes so it was almost a futile exercise, but we’d come this far.

We arrived at the Yangon Airport. A woman attendant at a ‘60s-style wood-panelled check-in desk confirmed our fears. Our flight to Heho had in fact left without us. We looked at each other and then at the floor where water was pooling at our feet and simply burst into laughter. It was as if my stress valve was finally released. My perfect flight record was metaphorically blown away by the artillery of water cannons and left behind on the soaking streets of Yangon.

We now played a devil may care; choose your own adventure. We picked a new flight to somewhere entirely different; the only criteria being it had to have seats. We reset plans and rewrote our future. Credit cards were not accepted? No problem, we’ll get cash. The ATM was empty due to the festival? No problem, we’ll scrape together everything we have in every currency we possessed. Somehow we would make it work.

Travelling to Myanmar mid water festival was intended to be an interesting event to witness. It wasn’t until being literally immersed in it did I feel the true healing effects it provides the people of Myanmar. Releasing the built up stresses of life and allowing me to truly relax.

Erin and I happily boarded our flight to Thadwe with our clothes slowly drying from the water. 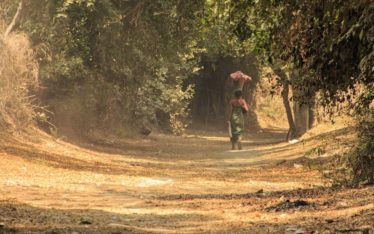 Walking in to Myanmar
Border crossings these days have lost the romantic appeal of yesteryear. Today you can drive across Europe, pass through 20 odd countries and never once get out your passport. Conversely...
59 Likes
wpDiscuz
0
0
Would love your thoughts, please comment.x
()
x
| Reply